A Heron looms over us…

… and a delicate touch 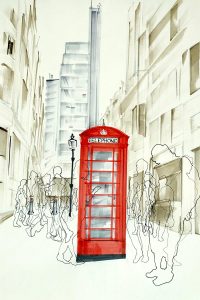 I recently came across this area with an interesting view, up near Liverpool Street Station. An old style, bright red telephone box is obviously the main thing, but also the older buildings surrounding it and then, looming over everything, Heron Tower (also known as 110 Bishopsgate, and Britain’s third tallest skyscraper).

I actually took initial pictures of this place a few months ago, but, on reflection, they just weren’t at the right angle to capture the feeling of movement which I strive for. So, back I went, and, being careful to avoid unwanted line tangents, but even more careful to capture those that I felt worked- well, here we are. Again, this is on A2 Cartridge paper -which still feels a bit small, but hopefully shows my progression from being confined to A4 or A3 at most- and I start with Cadmium red for the phone box, and Cool grey C9 for the base of the phonebox itself. Nearly black, but not quite. Why? I wanted to demonstrate black with a layer of London’s detritus on top, that’s why. Things are rarely jet black.

Next I outline the near buildings, using Copic Wide – Warm Greys, and then the modern structures using Cool Greys. I rarely mix the two types of grey, but here there was a definite contrast between new and old, so I wanted to reflect that. I embellish the glass panes of the telephone box using Copic Original C5 and C7, Then, using my new pens – Staedtler Mars Matic – which range in nib size from 0.25mm to 1.0mm, I draw the figures. This area is a busy, businesslike place, with people taking a shortcut to and from Liverpool Street station and their workplaces, and, apart from the occasional tourist – like the somewhat perplexed gentleman in the foreground, peering at me as I took my photos – I hope the stances convey the atmosphere therein. I have to use a much more delicate touch with these pens, and I think the contrast in line widths works well, allowing the viewer to differentiate between figures. 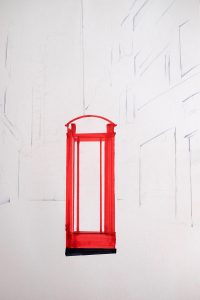 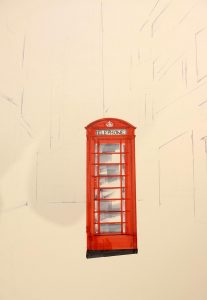 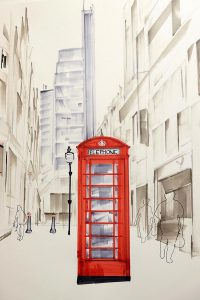 Buildings and the first few figures. 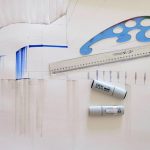 Stand behind The Yellow Line…Process, Technique 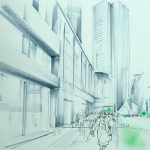