… but two points for a Nagoya score draw(ing)? 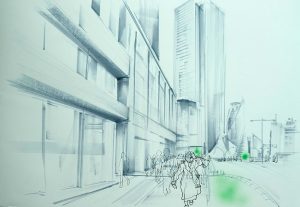 I decided to revisit my Nagoya photos to create another cityscape from Japan. I had spent an amount of time taking pictures looking up the main road near the station, and I didn’t want to ‘waste’ the experience. To NOT try and produce something from a visit somewhere means that all the aspects specific to that visit are gone – the light, the figures passing at that time of day, the clothes they wear on a seasonal basis, the subtleties in the skyline itself… all these things will not be the same on another day. They are specific to THAT visit, on THAT day, never to be exactly reproduced.

Also, I’ve been conscious of the effects of trying to draw in 3-point perspective, as shown by a drawing I did in New York a couple of years ago. Without going into detail, I now know not to try and show what a camera sees –  to show what our eyes see, is truthful and gives a much more pleasing effect. This is why I will always try and draw the buildings, structures and the general view ’en plein air’, when I am there… It’s not always possible, however, so, as well as taking pics of the passers-by I capture the surroundings, too. But when we look at something, we can’t focus on everything at the same time – we have a central area which we focus on and the peripheral areas fade from our concentration, so to speak. If you’re near a tall building, you can’t look at all of it, from top to bottom, at the same time. However…The camera never lies, but it bends not only the truth in its efforts to report what’s there. The upshot is, I had to convert my images back to 2 -point perspective, rather than the forced 3, when creating this image.

All the buildings and structures are rendered in Cool Greys, and some foilage, mostly in the foreground, means I utilised the Copic Spray device accordingly. Then, on go the figures – this time using a range of Copic Multiliners. The majority are rendered with a 0.03mm nib, so, a delicate touch was needed yet again. 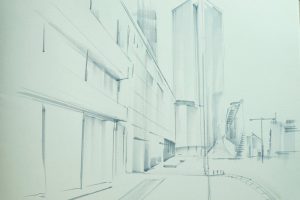 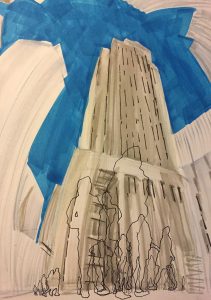 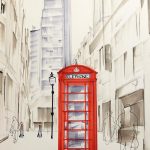 A Heron looms over us…Process, Technique 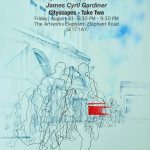 A date for your diary …Process, Technique, Travel