The next wave of Tokyo cityscapes starts with Shinjuku… 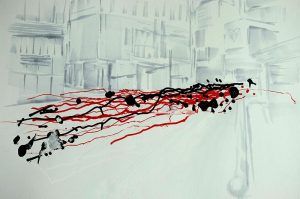 … these Copic Marker Pen Cityscapes will be based on sketches and pictures I took when visiting Japan in March 2018. This one is of a view I had near Shinjuku Station’s East exit gate. There was a low wall there I could sit on, it was a sunny day, and I drew the first image, which represented the movement of people (their hearts, heads and feet) to and from the road crossing, and up from the station. This view is shown in Landscape mode, as I was more concerned with the movement and relative height of the people around me, rather than the structures of the buildings (for which I would refer to my photographs). Incidentally, an online friend from Japan recently asked if Japanese people speak to me when I’m sitting out drawing. Well, on this occasion, the first was a ‘finance guy’ – black suit, tie, glasses – who stopped, looked at my drawing and said ‘very beautiful!’ and gave me the thumbs up. The next was a young lady wearing the obligatory mask, who walked past more than once and, on the third time, stopped and asked me if I ever use colour. Her English was better than my Japanese, so we had a chat for a while, about drawings, English language, London… I gave her a business card so she may be reading this now. I think her name was Yumi… And the last was an older Canadian (I think) chap who , believe it or not, I have seen hanging around the station on previous visits! I think he is homeless, and probably has quite a story to tell. He did the old ‘stand there watching me for a good 10 minutes before saying anything’, and he was quite complimentary regarding my capture of movements, saying ‘Yeah, yeah, I could see that one…’ as I replicated someone walking past.

Anyway, I now aim to create a cityscape that demonstrates that afternoon I spent there, and this will be on A2 Cartridge paper, using Copic Wide and Original Markers, OHTO Fineliners and Copic Neutral solution and Blue ink, both dispensed in 75 pence spray bottles I bought from Boots.

First I found a centre point from my reference pictures, and put in the verticals and horizontals using C1 and C2. I therefore then have a vanishing point from a perspective point of view (sorry) and also a point where people are moving from and to. I don’t like being a slave to exactitude when it comes to perspective or building structures. I prefer to demonstrate an overall feeling. Therefore I subsequently fill in more of the structures, using Copic Wide C2 and C3, concentrating mainly on shape and light relationships. I then masked off edges of buildings using acetate sheets and sprayed Neutral solution to presoak the area, then subsequently applied the blue. I hoped this would give an interesting effect for the sky, in contrast to the other rendering therein. This done, means it’s time for the figures. The pics I had taken with my iphone throughout my time sitting there would supply me with an accurate record of passers-by during that time. I sift through every one and select images with stances that interest me, and, importantly, work well with each other, in order to convey the feeling of the place. These are then drawn, with care and particular regard to relative heights and spatial relationships. These are most important part of the piece and when they are done, it’s done. Here’s my afternoon at Shinjuku East Exit Gate… 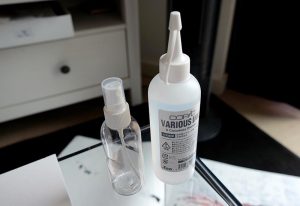 Copic neutral fluid in spray bottle can be used to pre-soak the paper prior to application of coloured ink. 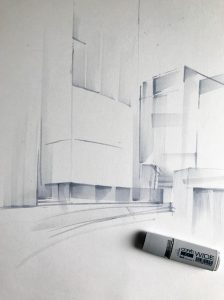 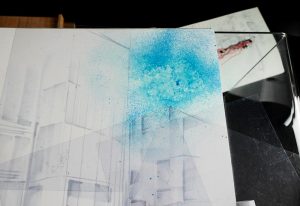 Acetate sheets used to mask the canvas for colour application. 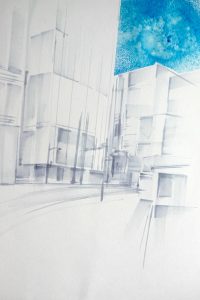 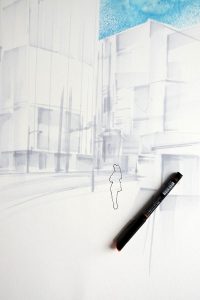 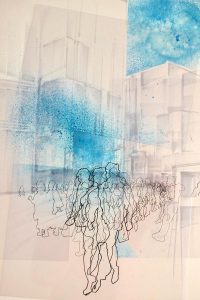 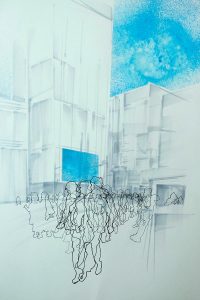 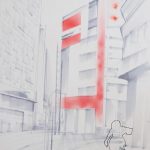 Another city in JapanProcess, Travel